How I miss those late college nights downing Red Bulls while trying to finish up that paper that was due 1st thing in the morning. Or maybe its those late nights yelling at the bartender for another round of jager bombs. How about waking up at the crack of dawn for a sporting event or last day of classes and breakfast consisted of kegs, eggs and Red Bull.

Whatever the case I think most of us have experienced Red Bull at some point in our lives. Red Bull is such an awesome company and it has almost nothing to do with the taste or effects of their actual product. Red Bull is awesome because of its image. They embrace living it up in life and taking things to the edge. To go along with this image they have a series of ridiculous events they put on every year. There are 2 things to think about here…

1. The competitors in these events are living the dream! Who grows up and dreams of racing planes or flying down a mountain side on their bike as a career? These guys simply loved something and went after it!

2. Remember that being an entrepreneur requires long hours and tons of hustle, but you should be doing it for the lifestyle. Make some time to head out to these free events or enter some of them and make some memories!

In 2009 there are 9 races planned across the world where pilots are put to the test in a competition that combines speed, precision and skill. The planes navigate a low level course at speeds reaching 230MPH. The pilots race through the course competing for the best times but must also take caution as touching the pylons will result in penalty time being added on. 15 pilots are competing in 2009 for the world championship which is a compilation of the results from all the ’09 races.

Spectators are welcome at all the races so get out there and check this crazy event out! Red Bull Air Race 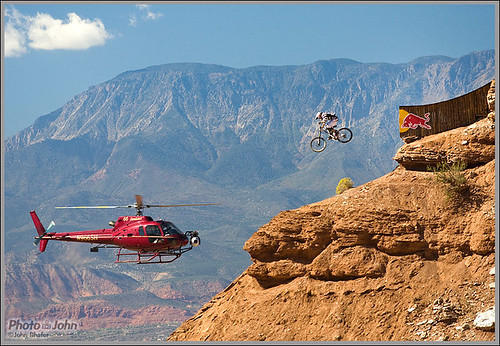 Started in 2001 Red Bull Rampage was simply Red Bulls take on mountain biking. Riders start at an established start point and have to make it 1,500 vertical down to the finish line, taking any route they chose in between. The event was risky enough in its first year but soon after things like tricks became mandatory on the ride down as well as cliff dropping as high as 35ft. The event was last held in 2004 but has made a return and is as awesome and crazy as ever.

Get out to Utah and check out the Rampage.

Here is an event you don’t see everyday. Red Bull’s Crashed Ice is a combination of hockey, downhill skiing and boarder-cross. Not even sure what to say about this. Your on skates flying down hill side by side with competitors while dealing with sharp turns, jumps and other obstacles.

Well at least its free to all spectators! Quebec next year check out Crashed Ice.

Here’s a fun event for the whole family. Build your own race car into whatever the hell you want it to be and fly downhill! One very cool part about this race is it is completely free to attend and participate! Just build your machine and your ready to go. Winning is not just about the race you are also judged on creativity so have some fun and go all out with this one.

Check out more on the Soapbox race

Many of us are familiar with this awesome event. Make your own flying machine! Build whatever you want and then plunge off a 30ft deck in hope you will fly…they rarely do. Again these contraptions are not judged just on flight distance but also on the creativity and showmanship of the whole team.

Done until 2010 check out the Flugtag!

So here’s the idea – Travel the world finding high cliffs to jump off of. Really what else is there to say about it?

At least there’s the option to just watch! Cliff Diving Held in New York’s East River park snowscrapers brings together the top snowboarders in the world for one night of high flying action. The riders compete for a piece of the $100,000 purse. The event ends with band performances as the park turns into a party on a cold NYC winter night.

Keep an eye out for the event in 2010 – Snowscrapers

Bring out your DJ skills and go head to head playing your original beats with the crowd favorite coming out on top. There are still a bunch of events left in 2009 so RSVP to get your spot at one of the shows. Maybe you will be witnessing the next big star in the music industry!

Get to Big Tune

Check out one of the few 1 vs 1 break dancing battle tours out there. Red Bull wanted to get away from the group break dancing battles that have sprung up across the world and get back to where it all started. 16 competitors go head to head to determine who is The One. The event was just held in NYC this July but will surely be back in 2010 so stay tuned to check out moves most of us would simply break something trying.

I’m sure we will continue to see Red Bull push the limits with their events and I can’t even imagine what future events Red Bull will conjure up.

But for all of us lets make sure to get out of the office and get to some of these events. If your really feeling creative live it up and enter them! Who doesn’t want to look back at the video of their flugtag attempt!?